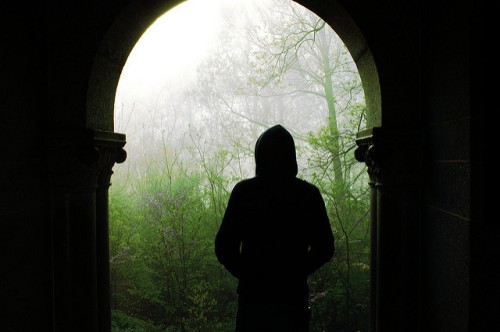 “O God, You are my God, earnestly will I seek You; my inner self thirsts for You, my flesh longs and is faint for You, in a dry and weary land where no water is.  So I have looked upon You in the sanctuary to see Your power and Your glory.”

One morning, the Lord spoke to me.

Months passed.  I grew restless, dissatisfied.  I knew God was calling me higher, but I could not figure out how to step in.  How to step beyond the veil.

Then again, He spoke to me.

“All in,” He whispered

Immediately I argued with the Lord.  “I am all in,” I complained.  “Don’t you see that?”

The heavens were silent.

In the silence, I looked at myself.  I saw the motive of my heart.  To my amazement, I realized that I was afraid.

Every day I had come to the threshold of God’s throne room and stopped.  I had stood at the doorstep of God’s presence and refused to go further.  I was comfortable there, in the outer courts, where the level of vulnerability and accountability was low.  In that moment, however, I realized that if I wanted more of God, He was requiring more of me.  In my flawed perception of God’s goodness and grace, I was afraid to give God more of me.  I feared that He would let me down.

I had a choice.  Would I wallow in my fear at God’s doorstep, or would I take the risk and step beyond the veil?  For awhile I stayed there, stubbornly bound to fear and distrust, until God allowed me to get so desperate, so discontent, that I finally fell to my knees at the threshold of promise and begged Him to give me the strength to step in.

“Come, daughter, come closer,” He called to me.

On my knees, without dignity or grace, without poise or composure, I crawled across the threshold of my resistance…and into the presence of God.  Immediately, I was caught up in His glory and bathed in His light.  All else became dim and unimportant.  All else faded from sight.  At the feet of Jesus, I realized that all my doubts and fears had been unfounded.  His mercy was more than my missteps.  His sufficiency was more than my lack.  His love was more than my fear.

Let us come boldly into the presence of the Living God.  Self is the sacrifice.  He is the reward.